Growing a technology ecosystem that works for everyone

Women Go Tech was founded in 2016 to provide mentorship for women wanting to enter or advance in the tech field. In their first seasons they received 250 applicants for 30 spots. Currently in the fourth season they received 800 applicants for 171 spots. In this story Žydrūnė Vitaitė, Diana Česonytė and Evelina Klibaitė talk about making the technology field more accessible and inclusive for everyone and why diversity matters.

“I think it was my third or fourth year working in the technology field, when I started feeling the urge to do something. When I jumped into the industry I got a lot of good advice from my mentor who was my manager at the time. This person was very supportive, encouraging, and helped me a lot. One thing is getting a job in the tech industry, another is coping with the stress and comments and still performing.     This is where many dropouts happen. If you are in an unknown, unfriendly environment and no one is supporting you, the majority of professionals will leave.”

Žydrūnė Vitaitė is one of the co-founders of Women Go Tech. She felt the power and value of mentorship first hand, which inspired her to start a mentorship programme for women working in or interested in working in the field of technology. For her, mentorship helped her through the hard times and gave her encouragement to strive for a leadership position. When her sister was facing the same struggles in her job in the construction industry, she realised the relevance of mentorship on a larger scale.

“When my sister got her first job, she was struggling with the same questions I had. Such as ‘Can I wear high heels to a business meeting or to my job and still be considered professional?’, ‘Can I perform well if I’m the only woman in the team?’, ‘How do I behave during presentations or company parties, if I’m the only or one of the few women there?’. I had a person in mind that could mentor her and I realised that this was something I had to do. Providing support to mentees by matching them with mentors who could help them achieve their goals and overcome their struggles. I saw the need for both supporting women already in the industry but also for women interested in getting into the field of technology.” 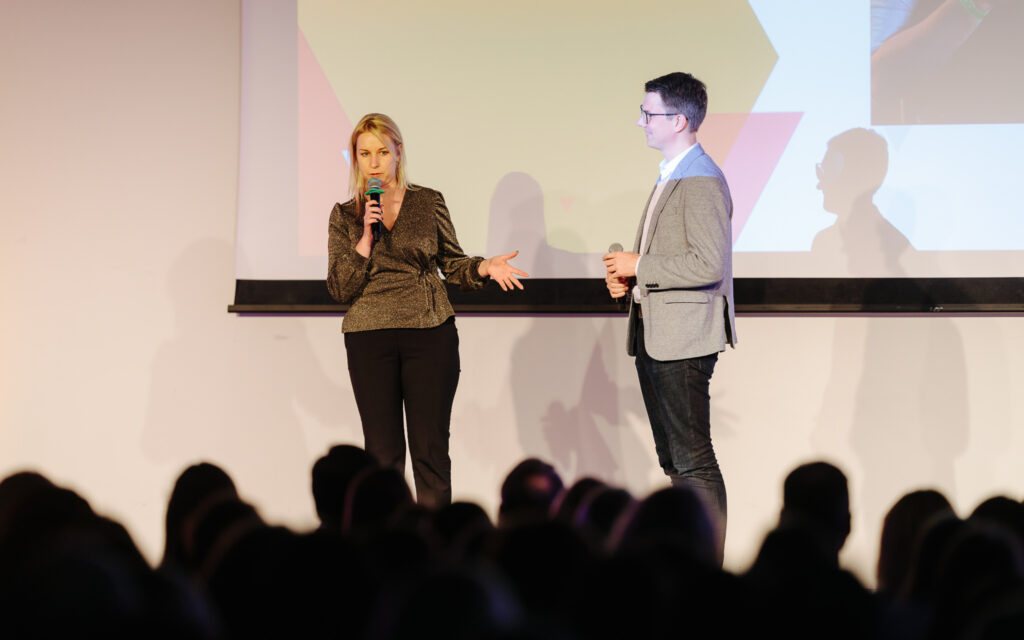 Žydrūnė knew that she needed a lot of support to make it happen. She was part of the Economic Forum Global Shapers community, but her idea was rejected twice. The first time the men in the panel didn’t believe anything was keeping women from working in the technology field. The second time the rejection was based on the ineffectiveness of one to one mentoring. Luckily she was able to meet like-minded people, like Paulius Vertelka, the Director of Infobalt at that time, who thought differently and saw the need for this idea.

“We recruited people who were interested and wanted to organise this and decided to go for it. For the pilot project we got nearly 250 applicants for just 30 spots. During the opening of the very first Women Go Tech season, the guy who rejected me twice delivered a speech apologising.”

The struggle against stereotypes

Women Go Tech just opened their fourth season. This year they got 800 applicants for 171 spots. Žydrūnė is now in the board and the current program director is Diana Česonytė. Diana started as a mentee with Women Go Tech. She was interested in technology and interested in working as a project manager in the field. Now she is supporting other women making their entry to the field of technology.

“Women Go Tech is a program designed for women wanting to establish a career in the technology field. Mentoring is the main product we do, which means one on one communication with a mentee who wants to go to technology field and a mentor with experience, expertise, and maturity to support the mentee in the struggles she might face on her way. They meet at least once a month for seven months to work towards the goal set by the mentee in the first meeting.”

The field of technology is experiencing the same struggles everywhere. There is a huge lack of talent and diversity. In Lithuania, ¼ of employees in technology are women, which is better than the EU average of 16-18%, but there is still a huge capacity for growth. IT has gotten a lot better, but fields like engineering and construction are still having problems with stereotypes and being a very harsh environment for women. Diana elaborates.

“The stereotype is still that engineering is mostly for men and that’s not true. Especially in the construction sector women are still discriminated against and stereotypes are prevalent making it tough for women to thrive. When women from this sector come to Women Go Tech, we can feel the pain. They say ‘I’m crushed, it’s enough for me. I wanted to show that I can, but it’s just too hard.’ Even strong women are broken. So we understand that boosting self-confidence is crucial. We want to show women that they can do it.”

The power of community

Both Diana and Žydrūnė are emphasising that one of the most important things for the women is becoming part of a supportive and encouraging community. The psychological stress and lack of support is one of the main things causing women to leave the field. A lot of women are educated in the field but not working there.

“Data shows that 50% of men who finished engineering studies, work as engineers. For women it’s only 30%. For vocational training it’s even worse. After engineering studies, only 10% of women work in the field. When we talk to women in the universities, they tell about the stereotypes starting from 6th grade all the way to university. Even if a woman chooses this path, she often gets comments like ‘what are you doing here, when are you going to drop?’”

These issues are surprisingly prevalent all over Europe. No one has really managed to address this challenge. This calls for more collaboration across borders to find common solutions. Each country already has different initiatives, so there is a lot to share and learn. 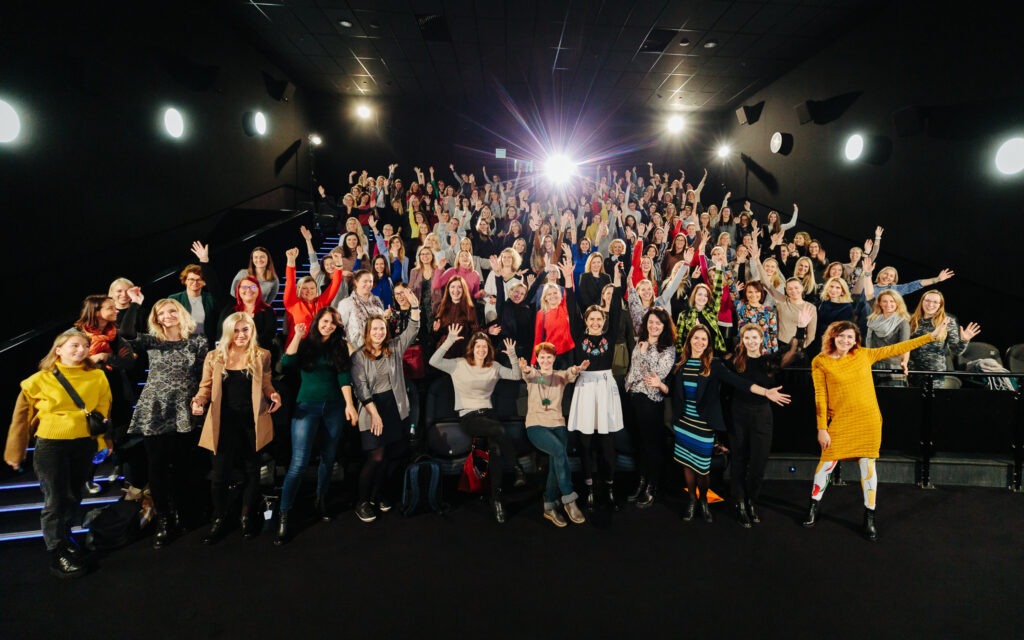 The four countries are Estonia, Latvia, Denmark and Iceland. Iceland stands out when it comes to gender equality and has done impressive work when it comes to policies regarding gender quotas and fighting the gender pay gap. Evelina Klibaitė, who is the events manager at Women Go Tech, argues how Iceland sets an exciting example for Lithuanian companies and organisations. This is just one of many good practices they are hoping to collect.

“The way we will collect good practices is through knowledge sharing workshops where the main stakeholders will meet. Main stakeholders include ICT (Information and Communication Technologies) and engineering companies, universities, policy makers and companies and organisations interested in gender equality. The main method will be brainstorming. We will analyse the issues that people are facing and the other participants will suggest ideas and solutions. Based on that we will make an action plan, how to solve the problems they are having.”

Both Evelina and Diana mention how they encounter the same issues no matter where they go. It’s not that women don’t want to work in tech. When women get the chance to learn or participate in mentorship programmes related to tech often there is a big interest. What’s lacking is overcoming the stereotypes, finding more female role models and ensuring inclusion in the field of technology. Diana feels that there is still a long way to go but it’s worth going. Global statistics show that mixed teams increase company revenue with 21 percent and boosts innovations.

“Gender equality has been a buzz word for many years, but we cannot yet close the book and declare the work done. Many things have been done, which makes it interesting to share experiences, to see what struggles others face and how they solve it. The struggles are often similar, which is why discussion is key. To see how we can help and learn from each other.”

Diana hopes that 5-10 years from now technology will be equally open for everyone and that the gender stereotypes will be outdated. Evelina hopes that Women Go Tech will be able to help many more women and include more fields of technology in their programs. There are still many fields they haven’t had the resources to cover. When it comes to the big vision, Diana emphasises that it’s really about supporting anyone being able to make it in tech.

“Women Go Tech is focused on women, but the company name is actually ‘Talents for Technology’. For me success would be that in 5 years ‘Women Go Tech’ would become ‘We Go Tech’. So far we have been focused on helping those who struggle more, but 5 years from now, I hope the norm will be that technology is a field open for everyone. Women Go Tech would not be needed. Instead we would be ‘We Go Tech’. ”

Diversity as a business advantage

Women Go Tech are very aware of gender equality, also when it comes to men. Half their mentors are male and men are also invited to certain events, where they are encouraged to participate and learn more. Žydrūnė argues that the need for diversity in the technology sector will only become more and more important. Whether it’s about gender, age, experience, or culture, she believes that creating useful products requires a diverse team.

“When we are thinking about creating security products, women often have the best feedback. They think completely differently about the experience side, such as choice of colour and why. We need to include various points of view, because we want to create products that are needed in society. Without it we won’t be solving the biggest problems.”

Women Go Tech is growing fast. Their community and number of initiatives and activities are growing. They are supporting awareness raising in schools about the field of technology for everyone. The core is still mentorship and while the mentees have had life-changing experiences, Žydrūnė also mentions the change the mentors go through.

“I noticed that some male mentors started hiring more women. They would never say that it’s because of their involvement here, but I see that being part of this community, people expand their views. Mentorship is not a one-way street. By giving a lot to mentees, the mentors get to share their knowledge. At the same time we are really working with the entire tech community, by exchanging inspiration, courage and ambition. If this work is continued for more decades we will create a different kind of society. In the future the current mentees will be leaders of companies. They will always remember the people who supported them in their first steps. Then our societies and companies are going to change.”

Women Go Tech is currently collaborating with Nordic Council of Ministers Office in Lithuania on their project to share knowledge and good experiences in the Nordic and Baltic countries. This project is focused on inclusion, gender equality and equal opportunities. Are you working on a project with strong values that align with the Nordic ones? See the opportunities for funding and collaboration right here.