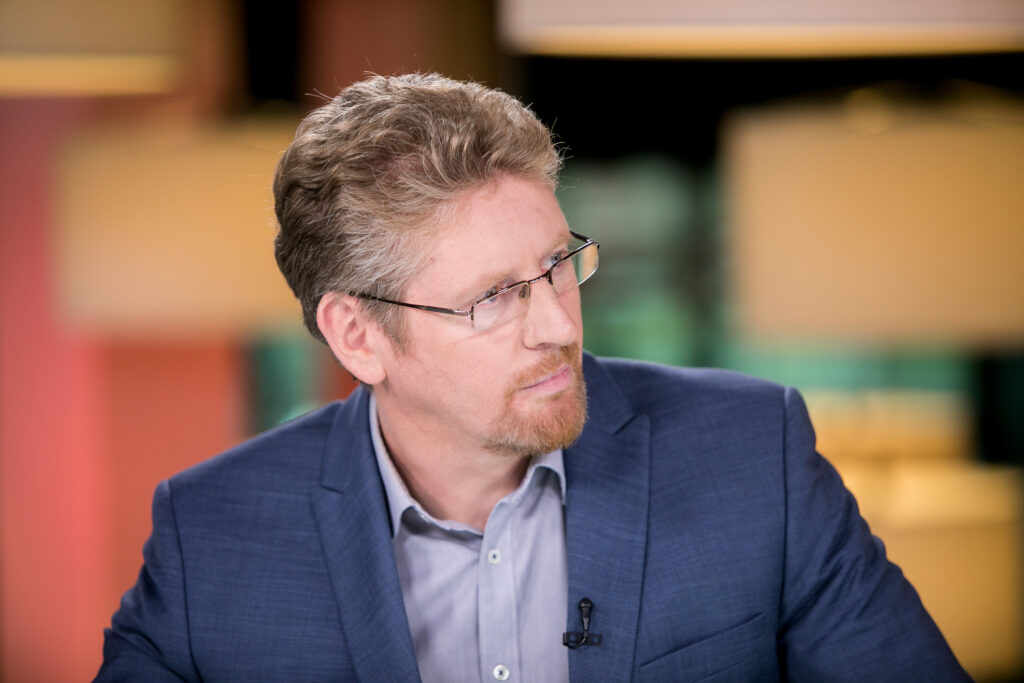 This story is about Oleg Jarofejev, who is the Editor in Chief of Russian Delfi in Lithuania. Through his work he strives to create interesting, relevant and entertaining content for all Russian speaking minorities in Lithuania. He believes this can help them feel just as much a part of Lithuania as everyone else.

Oleg Jarofejev is the Editor in Chief of Russian Delfi. When I ask him about his family background he tells me with a smile that he is a citizen of the Grand Duchy of Lithuania. With ancestors from Russia, Belarus and Lithuania, there is no simple way to explain exactly where he is from. His story is like many others. 15% of the Lithuanian population belongs to minority groups, primarily Poles, Russians, Belarusians and Ukrainians. All these groups have different histories and shorter or longer presence in the country. Some have been here for centuries. Some groups are still very new. What most of them have in common is Russian as their main language outside the home.

“Even Poles in our country speak Russian, so they use media, newspapers, and TV in Russian. Often this is the actual media outlets from Russia and not the local news media sources. The same goes for Russians in Lithuania, they don’t necessarily read the local Russian language media. In Lithuania we have Russian Delfi, one radio station, maybe 3-4 newspapers in Russian. But the influence of Russian media sources is high in our country, because we can’t compete with them in quality. But we try.”

Oleg has been in journalism for more than 20 years. After his studies in Russian Language at Vilnius University, he first worked in radio journalism and reporting. He then moved on to a Russian language newspaper and later Lithuanian Radio and TV. Finally in 2007 Delfi approached him about becoming the Editor in Chief for the Russian language version of Delfi and he has worked there since. The everyday work consists mostly of writing news stories about Lithuania and the world in Russian. One of the main goals is providing a competing narrative to the Russian outlets.

“We always fact check the information from Russia, because there are a lot of fake news, disinformation, propaganda. We have a network of journalists and we get support from our Russian colleagues to check the information. Other than the daily news stories we also produce documentaries or live streams with guests from Russia or other Russian speaking guests. It’s a lot of work, but it’s very interesting. When you see the audience’s reaction and their comments on social networks, it’s quite exciting. It’s inspiring for me.”

Through the Minority Language Media Grants, Russian Delfi and Oleg have received funds to produce a series of six videos about the 1990s in Lithuania. This was a period of enormous transition and transformation. The videos are about the people, challenges and issues of the time. The videos have different themes from criminal gangs and the Litas, to freedom of speech. The topic of the 1990s is popular in many countries in the region. For Oleg receiving a grant like this offers him the possibility to do something bigger in high quality. He had a dream to develop this project and to create something larger than he can do day to day. The grant helped make this dream a reality.

“I thought about this project about two years ago. I remember the 1990s because I was a boy, a teenager. I remember the situation at the time and lately I’ve been trying to really understand what was happening. The main idea was really my thoughts about this time. My generation is beginning to reflect on this time more. That’s why it’s interesting for them to see this kind of production. We have tried to talk with important, high level persons in Lithuania, for example the second prime minister of Lithuania, who provided the first money reform on the litas. Also other speakers from show business, economy, and culture. Often small outlets can‘t afford to do these kinds of projects, because of resources and small influence in the market. We managed to do it quite successfully.”

The video series have definitely had an impressive reach; both in Lithuania and abroad. Oleg mentions the video about gangs, which has more than 150.000 views on Youtube and it’s still growing. Maybe it will reach more than 200.000 views. This is a very high number for Lithuania, where content in Lithuanian language rarely gets that many views. One of the challenges for Russian Delfi, is to make their content interesting to a changing audience since the Russian speaking audience in Lithuania is not growing.

“Russian Delfi’s audience is about 500.000 people per month. That’s 50% from Lithuania and 50% from Russia, Ukraine, Belarus, Latvia. We try to cover the interests of both groups, because the local audience has no growth trend. The total audience for us in Lithuania is maybe 300.000 and this number is quite stable. The main challenge for local media sources in Russian and Polish, is to find audiences outside of Lithuania. This is the main reason why we are looking for topics of interest not only to people living in Lithuania but also in other post-Soviet countries in the region.”

For Oleg it is exciting that the potential reach of their content is transcending Lithuania. On the other hand it is also rewarding when their content gets attention from the Lithuanian speaking audience. The video on gangs and criminalization is being translated into Lithuanian and will be shared on Lithuanian Delfi, meaning it can reach the whole country. Obviously it is a success story from the point of view of viewership, reach and impact. It has burst the bubble of the Russian language minority. But Oleg also believes that the content of these videos have a much deeper and more substantial impact on the viewers.

“When we talk about transition and transformation in the 1990s, the people who now live in Lithuania, they were a part of this process. They are also a part of the process now. They see that. When one part of society just sit in their homes and watch Russian television it’s a bad situation. They live in another world. We can name it the Russian TV world. For our government it’s a bad indicator because these people might physically live in Lithuania but their minds, thoughts live in Russia. Sometimes it’s impossible to talk with such people. They can only talk about Putin, Russia. They are in a completely different reality.”

Oleg is very clear on how important and emotional this period was for the transition of Lithuania. He believes that the video project is helping people understand the whole transition in the bigger context of the whole region, which puts things into perspective.

“These stories are really stories about people who took part in this transition. These people had to make hard decisions, like how to protect their families, because it was a dangerous time, considering the situation with gangs. I think the main reason why this project is popular among the audience is because the journalists behind these videos, they try to analyse what happened, 20-30 years ago. They were living it themselves, being teenagers making their own decisions about their future life. It’s about the past, which became the present.”

In Oleg’s work the awareness of inclusion and social cohesion is also deeply ingrained. Having access to media in your mother tongue, even when that is not the majority language, is crucial. The work that Oleg does is really about solving social problems in Lithuania.

“When we talk about Russians in Lithuania, sometimes they live in a separate group, almost segregated. When we make these videos, they see themselves not only in these small groups outside the mainstream life. They can feel that they are an equal part of this country. They might feel that other people, the politicians don’t think about them. So for me, I think the best result of these projects is really when they help people feel part of the country. That’s very important. Looking at the situation in Ukraine, Russia quite successfully took advantage of the social problems in the country. When we live with people who think and feel that they are part of the society, it’s a good situation. When we have many small, divided groups it is very problematic for the country.“

Oleg Jarofejev applied for the minority language media grant to receive funding for this project on the 1990s.